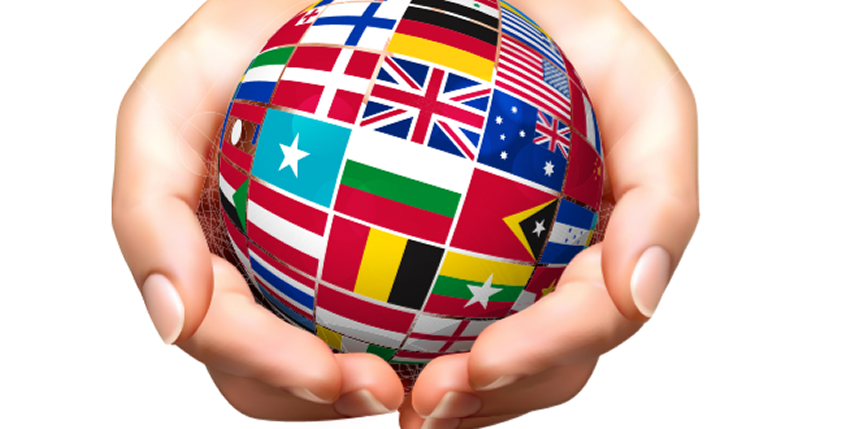 The changing face of expats

More than six in ten (62%) of expats say their future plans have been impacted as a result of the pandemic. Of those, more than half (53%) of respondents to they survey, carried out for Allianz Care, claim that health and wellbeing is now a greater priority for them than before the pandemic, while a similar number (48%) say that family is now more important.

The research, which was carried out among 1,300 respondents by Ipsos/Mori, among expats in the UK, France, Canada, UAE and Singapore, found that almost three quarters (73%) of respondents said that the health and wellbeing of their family is now a crucial consideration in deciding whether to stay abroad or move back home. 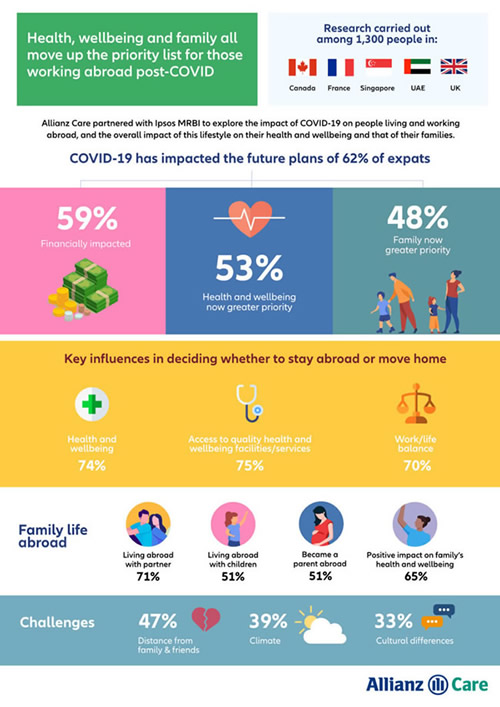 Almost half (49%) say financial gain is a primary driver for moving abroad, although it is the pursuit of a better quality of life, health and wellbeing that is key for the majority.

Almost half (46%) moved abroad for personal development, while 40% made the move in search of a better work/life balance.

Almost three quarters (71%) of those surveyed had moved abroad with their family, with half (51%) of all respondents living in their new country with their children.

Nearly two-thirds (65%) of respondents say that living abroad has had a positive impact on their family’s overall health.

More than a fifth (22%) put this down to being able to achieve a better quality of life (22%) while 21% say it is due to the ability to access to better health and wellbeing services.

The pursuit of a good work-life balance is a key influencing factor for seven in gen (70%) of expats in terms of deciding whether to stay abroad or move home.

Among that number, three in five respondents (60%) say they have a better work-life balance living abroad than they had at home. That figure rises to 72% in Canada and 71% in the UAE, although over a quarter (26%) of those living in Singapore found the work-life balance to be worse there.

In the UAE, a region traditionally associated with ‘expats’, the term is still widely used by more than three-quarters of people in this category (76%). But that figure falls to 35% in Singapore, under a quarter in the UK (24%) and France (23%) and just 11% in Canada. In these countries, the term ‘global citizen’ is more widely used today, at 48% in the UK, 33% in France, 29% in Singapore and 26% in Canada.

Paula Covey, Chief Marketing Officer for Health at Allianz Care, the international health brand of Allianz Partners, said: “2020 has been a life-changing year for many of us across the world as we deal with the implications of COVID-19.

“Massive lifestyle changes have been forced on us almost overnight, which in turn have forced us to re-assess how we live our lives and re-evaluate what’s truly important.

“The same is absolutely true for the ‘expat’ community who are living and working across the globe. This comes across strongly in the increasing prioritisation of health and family.

“We’re also seeing a shift in terms of the life plans of these people. In the past, ‘expat’ assignments tended to be highly paid and were often short-term, but our research has shown that this community is now taking a more long-term view of life abroad.

“Seventy six per cent said they had changed job since moving to their new country, 59% have bought a home and 58% said they plan to stay in their adopted country long-term. It’s an interesting trend to watch for employers, who are starting to move away from the traditional expat assignment model and towards more local recruitment in each market.”

Covey said that the “important” research is helping to inform the insurer about where it can support individuals and employers in terms of tools, guidance and information.

She said: “We can’t change a country’s climate, but we can put services in place to support people’s mental health when they’re dealing with loneliness, missing their friends and family or struggling to adjust.

“We can also provide support to help people settle into their new home, with guidance on what cultural differences to expect in countries around the world.

“Listening to our customers means we can constantly adapt our services and offerings to meet ever-evolving healthcare needs.

“The pandemic has shown all of us just how fast things can change.” 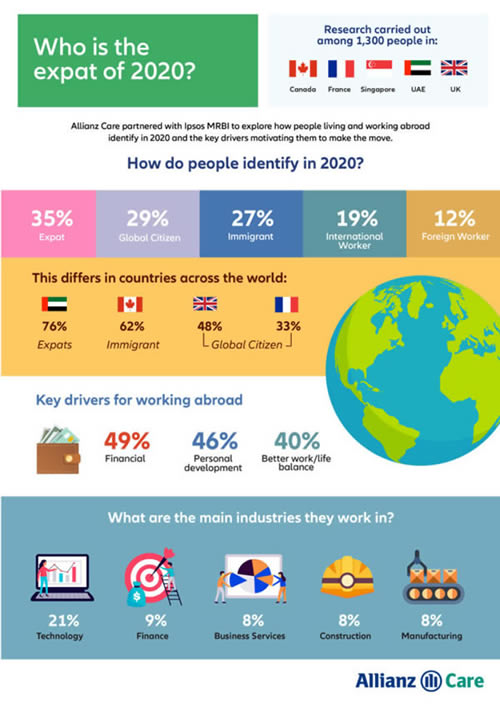 advo are specialists in delivering solutions for organisations who have overseas workers. If you would like to know more about how advo can help then in the first instance email on info@advogroup.co.uk

This news feature is based article first published in Health & Protection Magazine. You can read the original in full here.

← CIPD: Return to work must be gradual and meet three key tests Employee wellbeing – Tips for improving it today →
← Previous Post Next Post →