Widespread confusion about cancer symptoms is leading to delayed diagnoses and irregular self-examinations, according to new research.

One in two people in the UK will be diagnosed with cancer in their lifetime3 however 42% are confused about what to check for when it comes to common cancers such as skin, bowel or lung.

The study, undertaken by Bupa UK, found 45% say it is hard to remember the warning signs or physical changes they should look for. As a result, two in five (38%) people have never checked themselves2 and less than half (48%) look for symptoms of cancer at least once a month.

This confusion is a significant factor in delaying diagnosis. More than six million4 people said they have delayed seeking medical advice about a symptom as they “didn’t realise what to look for”. For two million people5 this symptom was later diagnosed as cancerous.

The findings also show that awareness varies between types of cancer. 45% of all women check for breast cancer at least once a month and a third (34%) of men regularly check for testicular cancer. However symptoms of bladder and pancreatic cancer are far less known and understood.

Being able to recognise if something is wrong is important to improving survival rates, which is why Bupa has created a simple Cancer Check-CUP guide. 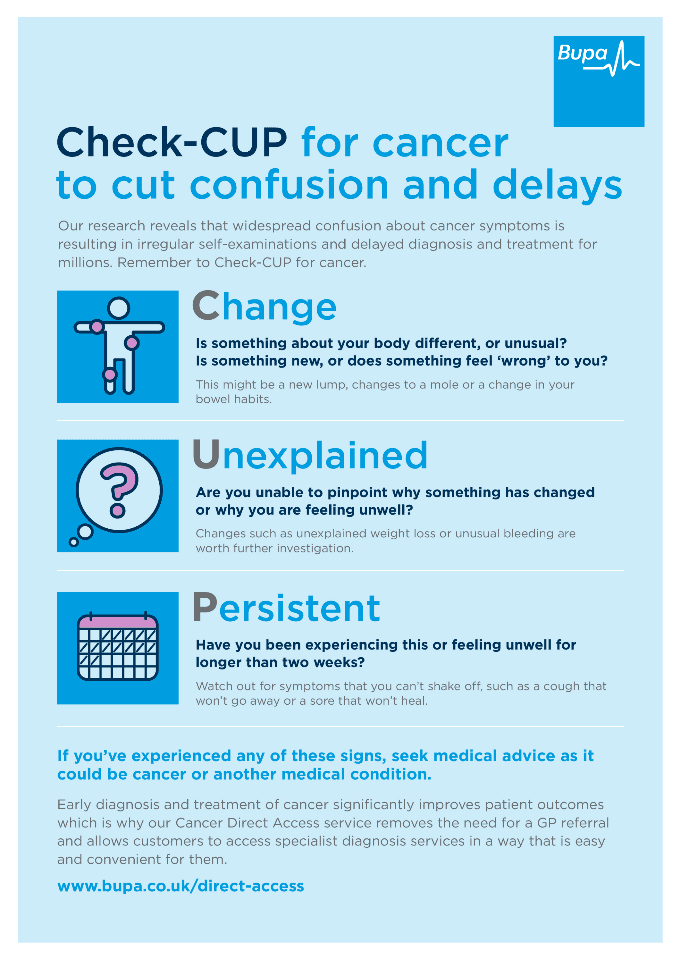 Dr Luke James, Medical Director at Bupa UK Insurance, said: “Half the population is expected to be diagnosed with cancer in their lifetime making early diagnosis and treatment so important to improving someone’s outcome.

“Survival rates continue to improve however many of us aren’t looking for the symptoms of certain cancers, or can’t identify them which is leading to delays in diagnosis.

“Our Cancer Check-CUP guide should help people check for possible signs of cancer and give them confidence to seek advice if they need it. If someone is worried about an unexplained or lingering symptom I’d encourage them to always get medical advice.”

Cancers which people would fail to recognise by the symptoms

If you are a Bupa member you can  use their self-referral service Cancer Direct Access where they can simply call the dedicated oncology team before being sped through to a specialist consultant, if they are experiencing cancer symptoms, without the need for a GP referral first.

1 The study examines seven of the most prevalent cancers (bladder, bowel, breast, lung, pancreatic, skin and testicular) according to Cancer Registration Statistics, England, sourced from ONS

2 Respondents were asked how often they consciously check themselves for signs of bladder, bowel, breast, lung, pancreatic, skin and testicular cancers. 38% of people have never checked themselves for any sign of cancer = two in five people

54% of respondents reported that they had delayed going to the doctor with a potential cancer symptom which turned out to be cancerous because they didn’t realise what to look for, therefore 4% of 51,767,000 = 2,070,680

Cancer self-examination – respondents were asked to assess how often they consciously check for the symptoms of cancer – 36% of people check every month, 22% check every six months and 23% check about once a year.