advo hr takes a look at a case where an incident occurred at one recruitment agency’s Christmas party with serious consequences, an example of where an employer can be held vicariously liable even where the incident does not occur at the official party.

Case law update: Recruitment agency held vicariously after MD assaults an employee at the work Christmas party.
In Bellman v Northampton Recruitment, the recruitment agency has been held vicariously liable when the managing director punched one of his employees’ which resulted in brain damage at the Christmas party. This happened after an argument broke out regarding terms offered to a new employee and when Mr Bellman (the employee assaulted) argued against Mr Major’s (the managing director) decision, he assaulted him.

Mr Bellman suffered from serious injuries which left him with traumatic brain damage.

When the Court of Appeal were making their decision, they had to consider the nature of Mr Major’s job and whether there was a reasonable connection between his job and the conduct. Given that Mr Major was the Company’s most senior employee, he had a responsibility to his employees and the argument was regarding his managerial authority. Also, the incident occurred at the hotel where the official party took place, therefore where the Company paid for the taxis and drinks increasing the risk that wrongful conduct might occur with the Company’s provision of alcohol, and it followed on from the official party the judges found Northampton Recruitment should be held vicariously liable for Mr Major’s actions.

Lady Justice Aplin commented: “In summary, it seems to me that given the whole context, and despite the time and place at which the assault occurred, Mr Major’s position of seniority persisted and was a significant factor. He was in a dominant position and had a supervisory role which enabled him to assert his authority over the staff who were present and to re-assert that authority when he thought it necessary.”

“In all the circumstances, therefore, as a matter of law, having conducted an evaluative judgment based upon the primary facts as found, there is sufficient connection between Mr Major’s field of activities and the assault to render it just that [Northampton Recruitment] should be vicariously liable for his actions.”

Sybille Steiner, employment partner at Irwin Mitchell, said: “This is a significant decision. The distinction between official work parties and impromptu after parties will not be the deciding factor. If a senior member of staff uses the after party to assert their authority and assaults someone, vicarious liability is likely to follow.”

In Part 2.. we give useful tips for HR on organising your Christmas party. You can read part 2 here. 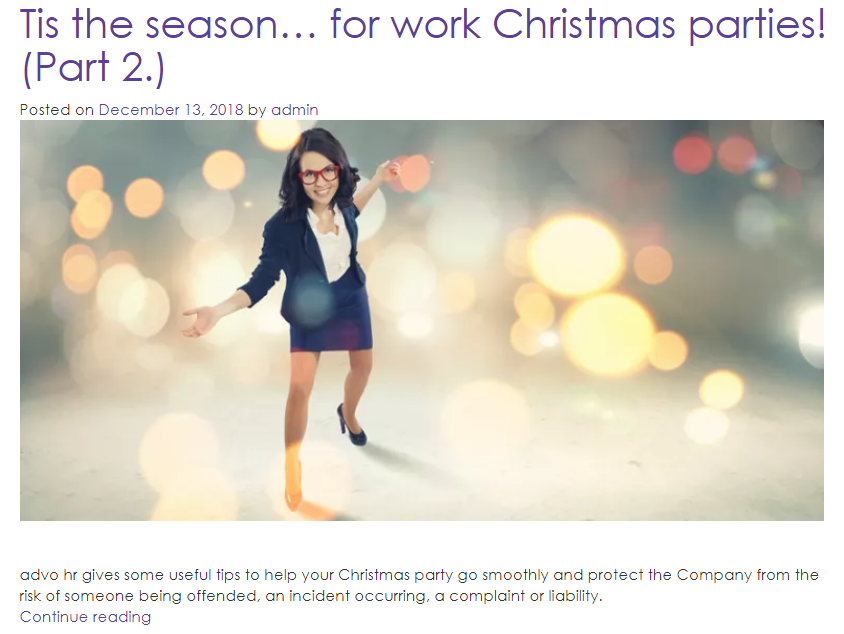