‘Stick your job!’: How to not quit

Quitting your job is an exchange fraught with feelings of discomfort. Employees often feel guilty that they’re letting the team down, and so downplay how ecstatic they are to be moving on to greener pastures.

On the other hand, a toxic workplace can just push an already disgruntled worker over the edge, with pent up anger being released in an all office email or a scathing Glassdoor review.

One disgruntled employee literally marked his disdain for his boss, by vandalising his car with graffiti, which read: “up yours, I quit” and “worse boss ever” and “stick ur job up ur arse” [sic].

A white Mercedes parked near Leeds train station was found with the black lettering emblazoned across it – and it soon went viral, receiving over 7,000 likes on Twitter. Whilst some Twitter users believed it was a marketing stunt, others lauded the individual’s unique resignation tactic. 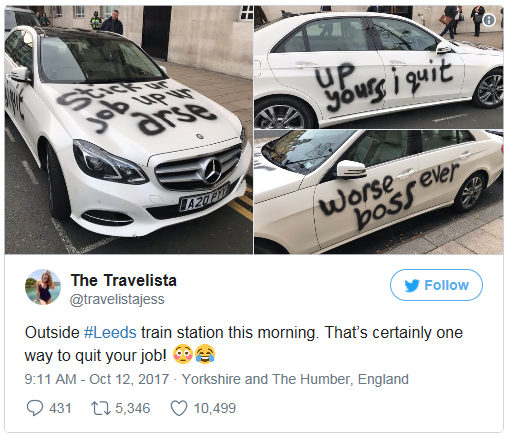 However, it should never be an employee’s intention to cause chaos when exiting a role, with former managers often used as a reference.

Speaking with Moneyish, Career Coach Roy Cohen advises against using your exit as a chance to lambast your soon-to-be-ex employer.

He said: “Our career and relationships will extend far beyond leaving one organisation and going on to another. There’s always a benefit to maintaining relationships and a positive impression with people you worked with.”

Yet, every resignation experience is different. Whilst some are bitter, others are a genuine heart-wrenching break-up experience.

We’ve listed five of the most common reasons workers leave their employer, and how to handle each scenario.

You hate the company

If the job was oppressive, don’t burn bridges by blasting the company in an outgoing email. Rather, contact HR and layout your problems in an exit interview.

Cohen told Moneyish: “It may feel good to vent, but in the long term you tarnish your reputation just a tiny bit because it’s going to leave people with a bad memory of you. If you harbour any resentment or anger, share it with friends but don’t make it part of your exit email.”

You’re moving to a rival

Cohen advises: “Don’t say where you’re going. Talk about how much you appreciate being at this company. You can talk about keeping in touch. It’s better to have people ask you if they’re interested.”

Try prefacing the email with an understanding of how difficult it is. However, you don’t want to make people feel bad because they’re stuck in their current role. You’ll want to keep relationships open.

If you’re changing industries, you might want to share what the inspiration is behind the move. You’re not moving to a rival, jumping ship or holding resentments – in fact, sharing might inspire fellow colleagues to follow their dreams.

If you’re taking a sabbatical to spend time with your family, take a break from industry or travel the world then it’s always best to overshare. Leave contact details, references to a blog you might be starting and really embed what you want to do after your sabbatical. You never know which contact could come in handy.

You’ve been made redundant

Although it is understandable that ill feelings may be present towards the company you are leaving, be sure to maintain contacts and civil relationships. If this is the case, then a goodbye memo is crucial to managing contacts, which can be helpful when interviewing at a new workplace.

“The whole purpose here is that you’re smoothing over the separation and you are establishing people who will serve as reliable references for you,” says Cohen.

This article was first published in HR magazine. You can see the original article here.

← The Pension dashboard – where are we? Productivity is down. Is the UK attitude to work and social media to blame? →
← Previous Post Next Post →