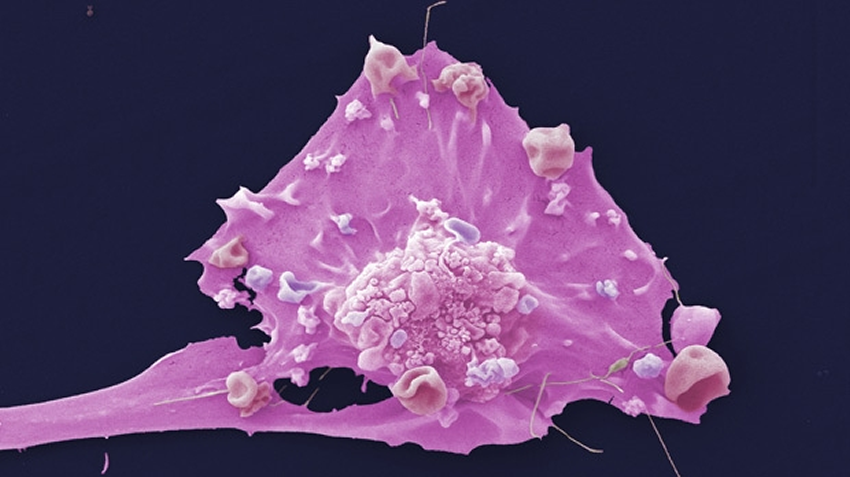 The genetic and molecular make-up of individual breast tumours holds clues to how a woman’s disease could progress, including the likelihood of it coming back after treatment, and in what time frame, according to a new Cancer Research UK-funded study.

In the first study of its kind, scientists at the Cancer Research UK Cambridge Institute at the University of Cambridge, in collaboration with Professor Christina Curtis at Stanford University, examined the patterns of genetic changes within tumours from nearly 2000 women with breast cancer and followed their progress over 20 years – including whether their cancer returned. They used this information to create a statistical tool that can better predict if, and when a women’s breast cancer could come back.

While the genetic analyses used in the study are too detailed for everyday use, the team are now working on a routine test that could one day help doctors offer women a more accurate prediction of if, and when, their disease may return. Although not available to patients yet, this means that in the future, treatments and follow-up can be tailored, improving women’s chances of survival.

Professor Carlos Caldas, lead researcher at the Cancer Research UK Cambridge Institute, said: “Treatments for breast cancer have improved dramatically in recent years, but unfortunately for some women, their breast cancer returns and spreads, becoming incurable. For some, this can be many years later – but it’s been impossible to accurately predict who is at risk of recurrence and who is all clear.

“In this study, we’ve delved deeper into breast cancer molecular subtypes, so we can more accurately identify who might be at risk of relapsing and uncover new ways of treating them.”

Previous results from this group of researchers had already revealed that breast cancer isn’t just one disease, but instead could be classified into one of eleven different molecular subgroups.*

The latest findings highlight how these molecular subtypes have distinct clinical ‘trajectories’, which can’t be predicted by looking at commonly used characteristics (such as size, stage, oestrogen receptor (ER), or Her2 status) alone.**

These clinical trajectories vary considerably, even between tumours that seem similar. For example, the team found, among women with a form of the disease called triple-negative breast cancer, there was a distinct subgroup whose outlook is initially poor, but for whom the disease is unlikely to come back in those who survived 5 years.***

They also identified subgroups of women with oestrogen receptor-positive (ER+) tumours, who were at a higher risk of their cancer coming back up to 20 years after they were first diagnosed.  Around 12,300 women in the UK **** could belong to one of these late relapse subgroups and therefore might benefit from longer courses of treatments such as tamoxifen, or more frequent check-ups.*****

“We’ve shown that the molecular nature of a woman’s breast cancer determines how their disease could progress, not just for the first 5 years, but also later, even if it comes back.” said Dr Oscar Rueda, first author of the paper and senior research associate at the Cancer Research UK Cambridge Institute. “We hope that our research tool can be turned into a test doctors can easily use to guide treatment recommendations.”

The model also revealed how molecular subgroups could behave very differently if a patient’s cancer returns. They commonly spread to different parts of the body and some are more aggressive than others, affecting how much time women survive for following a relapse.******

Professor Karen Vousden, Cancer Research UK’s chief scientist, said: “This study provides some valuable new insights into how we might identify women whose breast cancer is likely to return.

“We’re still a way off being able to offer this type of detailed molecular testing to all women and we need more research to understand how we can tailor treatments to a patient’s individual tumour biology. But this is incredibly encouraging progress. One in seven women will get breast cancer in their lifetime in the UK, and we hope that research like this will mean that if faced with the disease, even more of our daughters and granddaughters will survive.”

Catharine Scott, 51, from Cambridge, was diagnosed with triple negative breast cancer in 2016. She had the molecular biology of her tumour analysed as part of the Cancer Research UK funded Personalised Breast Cancer Programme at Addenbrookes hospital. This programme aims to confirm whether women are receiving the best treatment for their tumour type, and if they might be eligible for a clinical trial should they relapse in the future.

Since finishing treatment, Catharine had one scare in the summer of 2018, but it was not a recurrence. She has annual check-ups and mammograms.

Catharine said: “I finished my treatment and found it very strange knowing I wouldn’t see anyone for a year. I was at the hospital every week, then every three, then suddenly that’s it. It’s quite scary and definitely a worry. I spoke to my consultant at the time and asked, ‘How likely am I to get this again?’

“They can tell you the risks and likelihood, and how things have been in the past. If they were able to make it more personalised that would be more reassuring. It would definitely be better than feeling you have to cross your fingers.

“I feel lucky to have been on the trials and I’m glad to be helping with research. Women in the past contributed to get treatment where it is today and I’m glad to be doing my bit for my daughter, for other women and for the future generations.”

You can find out more about Cancer Research UK and their ongoing research here.

**Women with breast cancer are treated according to their age, menopausal status and the clinical characteristics of their tumour including size, grade, whether cancer is present in the lymph nodes, whether it’s hormone receptor positive or negative, and presence of the HER2 protein.

***Cancers clinically classified as triple negative had different recurrence dynamics. For IntClust10, the first 5 years after surgery largely defined patient outcomes and the probability of relapse after 5 years was 0.33, rising to only 0.38 after 20 years for the average patient. This behaviour is distinct from IntClust4ER- cases who exhibit a persistent and increasing risk of relapse with a probability of 0.32 at 5 years and 0.50 after 20 years.

****Estimated assuming the patient population from this study (total: 1865) is representative of the number of women diagnosed with breast cancer in the UK in 2015 (cases: 54751) https://www.cancerresearchuk.org/health-professional/cancer-statistics/statistics-by-cancer-type/breast-cancer.

*****Researchers found differences in the relapse trajectories amongst ER+ patients. IntClust3,7,8 and 4ER+ had better prognoses than IntClust1, 2, 6 and 9. The latter late recurring subgroups account for 26% of all ER+ cases and are at particularly high risk of late relapse after surgery with mean probabilities of relapse ranging from 0.42 to 0.56 up to 20 years post-surgery.

******For a subset of patients (618 out of 1079 with distant relapse) a complete description of all recurrences is available, enabling analysis of the rates and routes of distant metastases and their lethality. Integrative Clusters revealed additional variability in distribution of metastatic sites, although due to the limited sample size in each group, many differences are not statistically significant.*******METABRIC data and samples are being used in drug development as part of the personalised breast cancer programme https://crukcambridgecentre.org.uk/news/breast-cancer-dna-%E2%80%98barcoding%E2%80%99-programme-be-rolled-out