Nearly 40% of all cancers are avoidable

More than 135,500 cases of cancer a year in the UK could be prevented through lifestyle changes according to research from Cancer Research UK.

The figures revealed in the newly published study* reveals the effect of lifestyle on increasing risk of cancer.

The latest figures, calculated from 2015 cancer data, found that smoking remains the biggest preventable cause of cancer despite the continued decline in smoking rates.** Tobacco smoke caused around 32,200 cases of cancer in men (17.7% of all male cancer cases) and around 22,000 (12.4%) in women in 2015, according to the research published in the British Journal of Cancer.***

Obesity causes 13 types of cancer, including bowel, breast, womb and kidney. And the results suggest that more than 1 in 20 cancer cases could be prevented by maintaining a healthy weight.

The third biggest preventable cause of cancer is overexposure to UV radiation from the sun and sunbeds, which causes around 13,600 cases of melanoma skin cancer a year (3.8% of all cancer cases).

Other preventable causes of cancer include drinking alcohol, eating too little fibre (causing around 11,900 and around 11,700 cases respectively, which is 3.3% each) and outdoor air pollution. While air pollution is to blame for around 3,600 lung cancer cases a year (1% of all cancer cases), it still causes far fewer cases of lung cancer than tobacco. ****

Sir Harpal Kumar, Cancer Research UK’s chief executive, said: “Leading a healthy life doesn’t guarantee that a person won’t get cancer, but it can stack the odds in your favour. These figures show that we each can take positive steps to help reduce our individual risk of the disease.”

“This research clearly demonstrates the impact of smoking and obesity on cancer risk. Prevention is the most cost-effective way of beating cancer and the UK Government could do much more to help people by making a healthy choice the easy choice.”

Professor Linda Bauld, Cancer Research UK’s prevention expert, said: “These new figures show that the battle to conquer smoking-related cancer is far from over. But the declining numbers of smokers show that prevention strategies are working.

“Obesity is a huge health threat right now, and it will only get worse if nothing is done. The UK Government must build on the successes of smoking prevention to reduce the number of weight-related cancers. Banning junk food TV adverts before the 9pm watershed is an important part of the comprehensive approach needed.”

***These figures were calculated by combining data on risk factor prevalence in 2005, cancer incidence in 2015, and published evidence on the risk of developing cancer in people exposed to the risk factor versus those unexposed. Calculations were made for each UK nation separately, broken down by sex and age band, and then combined to reach the UK total figures. 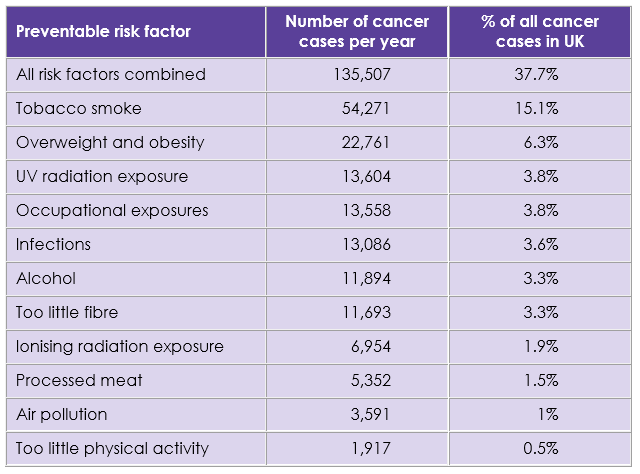 Find out more about the causes of cancer here.

The Cancer Research Press Release can be seen in full here.