The new study1 commissioned by Bupa and undertaken by from Cebr, is the first to assess the impact of Insurance Premium Tax increases (IPT) on the UK’s health and social care system. IPT is levied on some insurance policies including health insurance; it has doubled since 2015 and currently stands at 12%.

The study reveals that the tax is contributing to thousands of individuals giving up their policies, which cover costly care and treatment for conditions including cancer, heart and joint surgery, with every 1% increase leading an estimated 21,000 health insurance customers every year to depend solely on the NHS for all of their healthcare.

The report looks at the impact on individual customers, suggesting that the decline in the number of people with health insurance tracks the rise in Insurance Premium Tax and that the situation will worsen further if the Chancellor raises the tax once again in this month’s Budget.

Increasing IPT again could see even more people cancel their health insurance or reduce their level of cover leading to the unintended consequence that the revenue collected from health insurance actually falls over time and demand on the NHS increases as healthcare previously funded through health insurance now has to be provided by the public health system.

IPT hits those who have the most need to keep their health insurance hardest, as older individuals with riskier health profiles who pay higher premiums, pay more tax.

The study suggests that the government’s use of a tax which discourages people from taking out health insurance runs counter to the views of the UK public, who believe that health insurance complements the NHS.2

Two-thirds (63%) of people say that health insurance allows others to access NHS treatment earlier and over half (55%) view it as important in relieving pressure on the NHS. 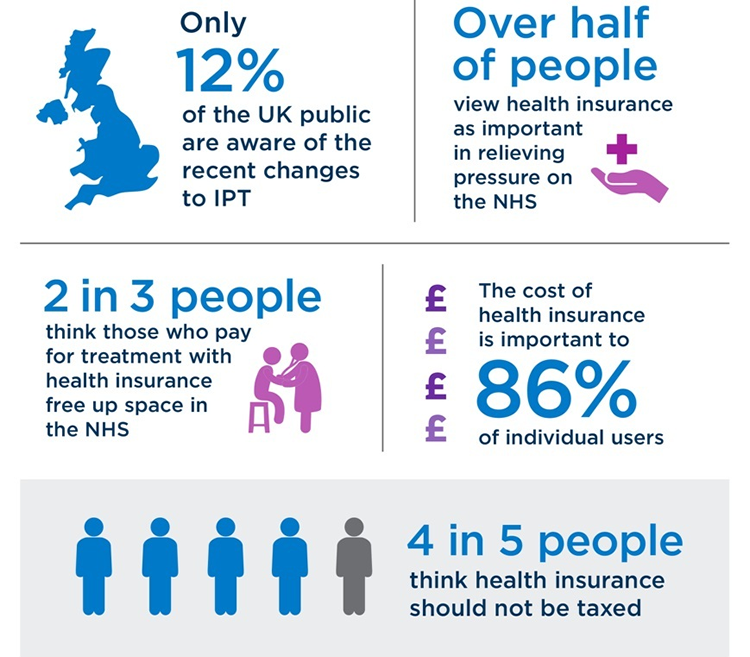 “This means longer waiting times for everyone else for treatments such as cancer care and cataracts, and even more pressure on over-stretched NHS finances.

Cost is the main factor for people when choosing to buy health insurance, which explains the high attrition rates for individual policies as taxes have increased. When questioned, a third (33%) of people would consider taking out insurance if costs were lower, while one in three (33%) policyholders say they will consider cancelling their policy if their premium goes up.

“Ahead of the Budget Statement Bupa is calling on the government to freeze the current rate of Insurance Premium Tax on health insurance and to reconsider how it is taxed.”

Oliver Hogan, Chief Economist at the Centre for Economics and Business Research (Cebr) said: “This is the first research to consider the impact of Insurance Premium Tax on the UK’s public health service. The impact of the tax has not been considered by the Government and we hope this research will make for interesting reading for the industry, the government and the public. As this is a tax that has increased successively over the last 3 years, and may increase further in the future, research into the financial implications for the NHS and the welfare impact on patients and society is needed.”

1 Research by independent economists Cebr, commissioned by Bupa in October 2017.

You can see the Bupa press release in full here.