POSTED: September 19 2018
How the breakthrough prostate steam treatment could benefit a huge group of men

An innovative steam treatment for men suffering with an enlarged prostate is set to be made more widely available after being given the green light for routine use by the health watchdog, NICE.

Professor Hashim Ahmed, Consultant Urological Surgeon at Bupa Cromwell Hospital outlines the procedure and how it will make a difference. 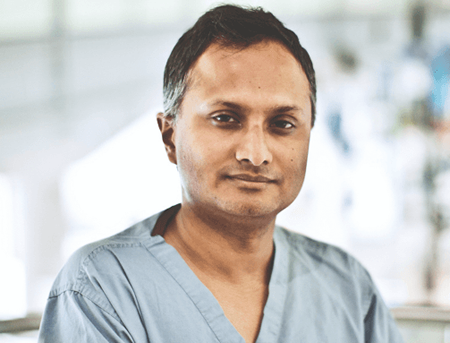 “I was one of the first consultants to perform the new treatment known as Rezum, and we have performed the procedure a number of times at Bupa Cromwell Hospital. The initial results have been very impressive and in most cases aims to replace the traditional operation, called a transurethral resection of the prostrate (TURP).

Symptoms of an enlarged prostate can include poor urine flow, a feeling of incomplete emptying of the bladder, and needing the toilet more frequently and with more urgency. The condition, also known as benign prostatic hyperplasia (BPH), is very common in men over the age of 50, affecting around one in three. The TURP procedure to treat BPH is performed on thousands of men every year. It takes approximately an hour and requires two to three days in hospital.

So how does the steam treatment work? The new procedure, called Rezum Water Vapour, avoids the need for invasive surgery and reduces the risk of associated complications such as bleeding, incontinence and sexual dysfunction. Small amounts of steam are injected into the prostate which destroys some of the prostate tissue, reducing its size. The procedure takes 10 to 15 minutes under local or general anaesthetic with patients able to go home the same day.

I was the second surgeon in the UK to perform this procedure and I performed the first procedure in London last year. I was also one of the lead surgeons involved in last year’s trial on 150 men which showed remarkable results. So it is great that we can now offer this treatment more widely as a huge group of men could benefit.

Men often worry about the side effects of an operation which means they suffer without seeking treatment. While the results of the treatment are not instant, it might take three to eight weeks to see the benefits, the impressive results show that men needing traditional surgery or those who don’t want to take tablets long-term might benefit from Rezum. It is less invasive, carries fewer side effects for our patients, and patients get a quicker recovery meaning they can get on with their life.”