POSTED: July 24 2017
Business affected as UK adults continue to be worst sleepers in an international survey

Survey confirms that nearly 20 million UK adults(1) are not getting the right amount of sleep.

UK adults continue to be ranked the worst reported sleepers in an international survey carried out by Aviva health insurance. The survey, which compares findings across 14 countries(2) reveals that more than a third (38%) of UK adults believe they are not getting the right amount of sleep.

A previous wave of this study carried out in 2016 found UK adults to be the worst reported sleepers with 37% saying they weren’t getting the right amount of sleep. 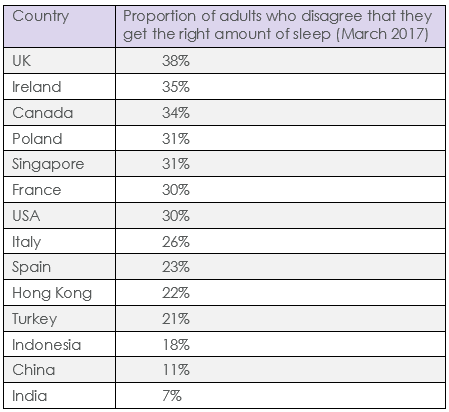 Gender: Among the self-proclaimed poor sleepers, UK men are worse than women, with 41% feeling they do not get the right amount of sleep compared to 35% of UK women.

Relationships: In addition, one in three (36%) adults who are married say they don’t get the right amount of sleep, compared to nearly half (45%) of couples who co-habit.

Children: Overall UK adults with children appear to sleep more or less as well as those without children, with 38% and 37% respectively saying they don’t get the right amount of sleep.

Education: The study also found that within the UK, levels of sleep vary depending on the individual’s level of education. Nearly half (48%) of UK adults with a Master’s degree or PhD felt they did not get the right amount of sleep, compared to 37% who finished their education at secondary school. However those who have attained a Bachelor’s degree are most likely to sleep well, with only 35% feeling they don’t get the right amount.

Dr Doug Wright, Medical Director for Aviva UK Health said: “Our research continues to highlight that millions UK adults still feel that they are not getting the right amount of sleep.“Our research suggests that some groups of adults may be more susceptible than others to sleep problems, but there are no set rules and we can all suffer from disrupted nights from time to time. But what is important, is to identify any issues early on and to take action to alleviate them. Using an app or a digital device to monitor sleep can help to track rest patterns and pin-point any factors which may be causing sleep difficulties.

“And if stress, anxiety or other mental health issues are having an impact on sleep patterns, or if problems continue for a prolonged period, it may be an idea to seek advice from a GP. A better night’s sleep can help to improve overall health and wellbeing, so it pays to tackle sleep problems as soon as possible and nip them in the bud.”

For more advice on keeping healthy and additional articles on how to sleep better, visit Aviva’s Home of Health page here.

You can view the Aviva press release in full here.

(2) The Aviva Consumer Attitudes Survey interviews c.1,000 adults aged 18 using online panels in each country surveyed except China (1,500 interviews), and India (1029) where the survey is conducted face-to-face and online (14,545 interviews in total). Countries surveyed include:  UK, Ireland, France, Poland, Spain, Italy, Turkey, Singapore, Hong Kong, China, Indonesia, India, Canada, and USA. A quota sample was interviewed with quotas set by age, gender, region and income by country. The questions referenced in the document were only asked of those who had driven in the last two years. Data is weighted to the known profile of the population in each country. The research was conducted by Ipsos MORI between 17th March and 1st May 2017. The results from this wave were compared with an earlier wave of 13,562 interviews across 13 countries (excluding Hong Kong), carried out using the same methodology between and 15th March –22nd April 2016.