The rate of people dying from bowel cancer in the UK has plummeted by more than 30% in the last 20 years,* according to new figures released by Cancer Research UK. 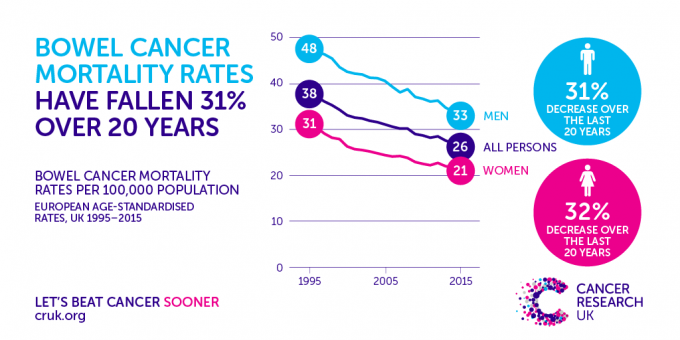 Experts believe better treatment lies behind the dramatic drop in deaths. Improved public awareness among both patients and doctors, the bowel screening programme, may also be playing a part.

Professor Matt Seymour, Cancer Research UK’s bowel cancer expert based at the University of Leeds, said: “Early diagnosis is critical for bowel cancer survival. In my opinion GPs and patients are becoming more aware of bowel cancer symptoms and acting more quickly than in the past. The national screening programme, introduced in 2006, means some cancers can be cured before they have caused any symptoms at all. And in our hospitals, better standards of surgery, radiotherapy, chemotherapy, imaging and pathology are all improving patients’ chance of cure.”

Clive Barley, 69, from Lancashire, was diagnosed with bowel cancer in 2003 after going to the doctor when he noticed blood in his poo.“Tests revealed I had a cancerous tumour in my bowel and the following month I had surgery to have it removed,” he said. “I had to spend Christmas in hospital but the operation was a success. I have check-ups every five years and I’ve been cancer-free for nearly 12 years.

“Luckily the cancer was caught in its early stages, and thanks to the excellent treatment I received from the medical team at Blackpool’s Victoria Hospital, my cancer experience has been a very positive one.”

Most patients are aged 50 or over when diagnosed with bowel cancer. Around half of these cases are preventable. One of the best ways to reduce the risk of the disease is to try and maintain a healthy lifestyle by cutting down on red and processed meat, keeping a healthy weight, not smoking and keeping active.

In 2014, almost 41,300 people were diagnosed with bowel cancer of whom 22,844 were men and 18,421 women. Latest figures show that 8,613 men and 7,152 women died from bowel cancer in 2015.*** While deaths from the disease continue to decline bowel cancer is still the second most common cause of cancer death in the UK accounting for 10 per cent of all cancer deaths.

Dr Julie Sharp, head of health information at Cancer Research UK said: “The increasing number of people surviving bowel cancer today shows how vital research has improved the treatment of the disease over the years. This positive trend is set to continue as new and improved bowel screening is rolled out nationwide, which can detect the early signs of cancer before symptoms develop. Together all these improvements will continue to have a real impact on tackling this disease.”

*Calculated by the Statistical Information Team at Cancer Research UK. Figures based on three year bowel cancer mortality averages from 1993-1995 to 2013-2015.

***Mortality figures calculated in 2015 are based on the most up to date statistics.

You can see the Cancer Research press release in full here.