Approaching retirement with a blindfold

Recent government figures show that while the number of people saving for retirement is at a record high, the average amount they are saving is at a record low. This comes as another report confirms that many people are in the dark about their own pension savings.

The new report from Aviva and provides analysis of UK consumers’ mindsets and reveals that almost half the UK population think they need to save more.

The report highlights that two in five (40%) working adults aged 46-55 are approaching retirement without knowing how much they have saved in their pensions, despite closing in on the age they can access their pension savings for the first time.

The study amongst employees aged 22 to 65 – the age criteria currently used for automatic enrolment pension schemes – reveals nearly a third (31%) admit to not knowing how much they have saved in their pensions. Surprisingly, this peaks at 40% for 46 to 55s, compared to just 24% of employees aged 22 to 30.

Commenting on their report Alistair McQueen, Head of Savings and Retirement at Aviva said “Not knowing how much you have saved in your pension pots is like approaching retirement with a blindfold on. For those in their 40s and 50s, understanding retirement savings is especially critical. They can be accessed at age 55, at which point some big decisions might need to be made. Without knowing how much you have saved it’s difficult to put a plan in place that could improve your retirement.

The need to save more

Figures released earlier this year by the Department for Work and Pensions reveal workplace pension participation is at an all-time high, reaching 84% of eligible employees in 2017, up from 77% a year earlier2.

However, the average amount being saved by each active saver is at a record low of £5,1103 per year (2017) and this figure may be inflated by higher earners saving a greater proportion of their salary. Aviva’s research also shows that almost half (49%) of working adults aged 22 to 65 believe they need to be saving more.

What are your thoughts on the size of your savings (pension and otherwise)? 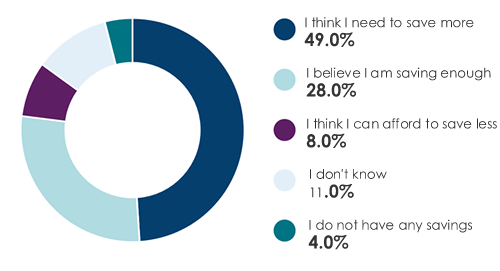 The reality of needing to save more is not lost on those who are already at their potential retirement age, with 40% of employees aged 56 to 65 agreeing they need to do so – though a similar proportion (38%) say they are saving enough. Workers aged 31 to 45 are the most keenly aware of the need to increase their savings (52%).

Aviva’s research reveals an even split between those feeling positive and those feeling negative about their savings – 42% feel secure, confident, proud or excited while 41% feel worried, disappointed, stressed, regretful or panicked.

The most common emotion associated with people’s current savings levels is negative, with almost one in five (18%) describing themselves as ‘worried’. However, this is followed by the more positive ‘secure’ (15%) and ‘confident’ (14%).

Some of the responses do however highlight stark differences between men and women. Almost a quarter (23%) of women say they feel worried about their level of savings compared to just 13% of men. Similarly, while 18% of men describe themselves as confident about their savings, just 10% of women say the same.

Alistair McQueen comments: “Although almost half the population have admitted that they don’t think they are saving enough, the fact they are aware is clearly a positive. This needs to be acted upon, but it can be difficult when people are already under financial pressure.

It’s clear there are some fears and insecurities around savings and having two in five people either worried or stressed about their finances is a concerning statistic.

Retirement is very much in the control of the individual. The money saved now will be in their hands in the future, so now is the time to start making active choices which will help to achieve those retirement dreams.”

You can download Aviva’s ‘Savers vs Spenders’ report here.